I’ve been photographing the frogs in my garden for years. They are very cooperative subjects….they sit still for ages and don’t mind the camera…. But the puzzle to solve in photographing them is to make the image interesting, so that the viewers response is more than ‘yes that’s a frog, so?’.

These are my most successful efforts to date, as usual it’s all in the lighting. 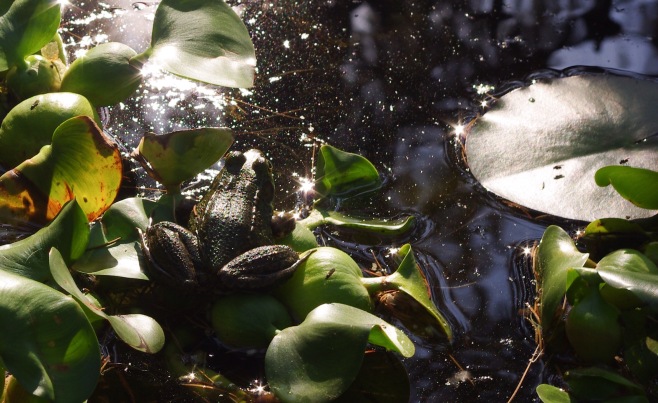 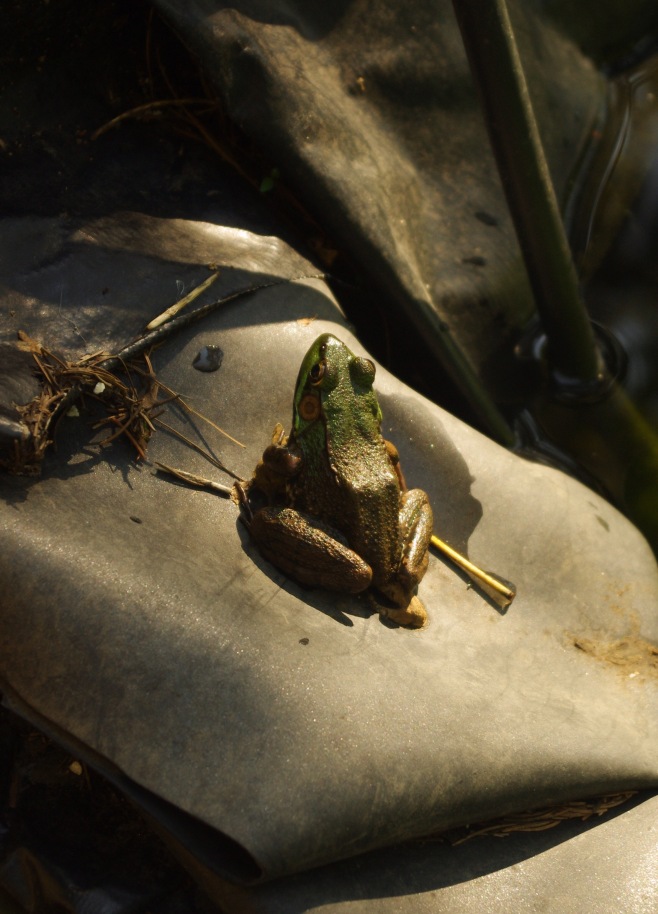 This one almost feels like a studio shoot, draped backdrop and dramatic lighting…. 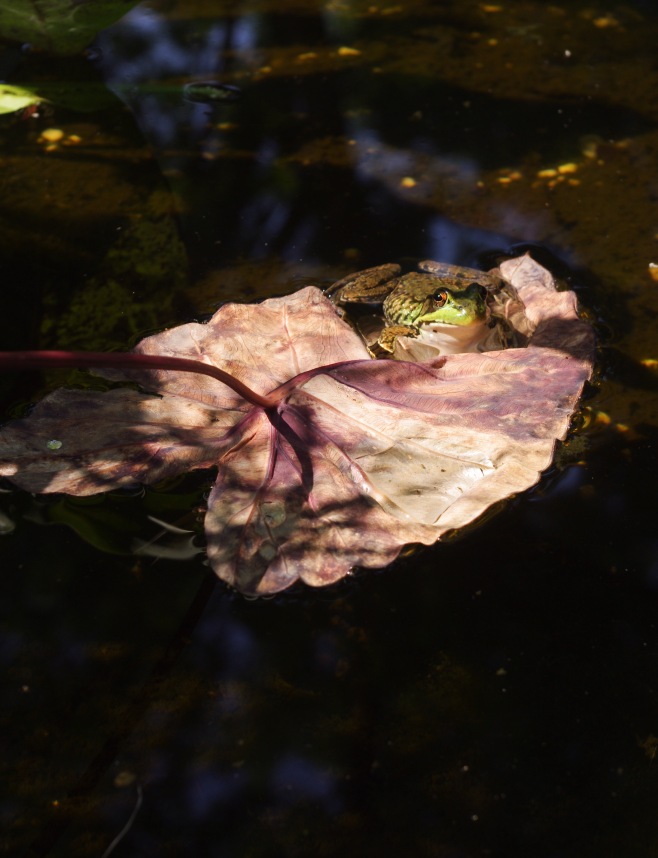 I like the drama of this one, both the lighting and composition.
Every time I do ‘wildlife’ photography I am more in awe of the skill and patience of professional wildlife photographers.

I have really enjoyed watching the frogs at my water feature this year, happily assuming I knew what they were – Green frogs (Rana clamitans melanota). However as the summer went on it became obvious one was not like the others. Turns out she’s a Bullfrog (Rana catasbeiana). By the way, Scientific Latin + auto spell check = nightmare. There is a trick to telling them apart, besides the size difference, which is only helpful when you can compare them. Green frogs have a dorsal lateral ridge a raised line that begins at their eye and runs down their back. Don’t be confused by the black markings which go around his eye (I believe these markings vary from frog to frog). 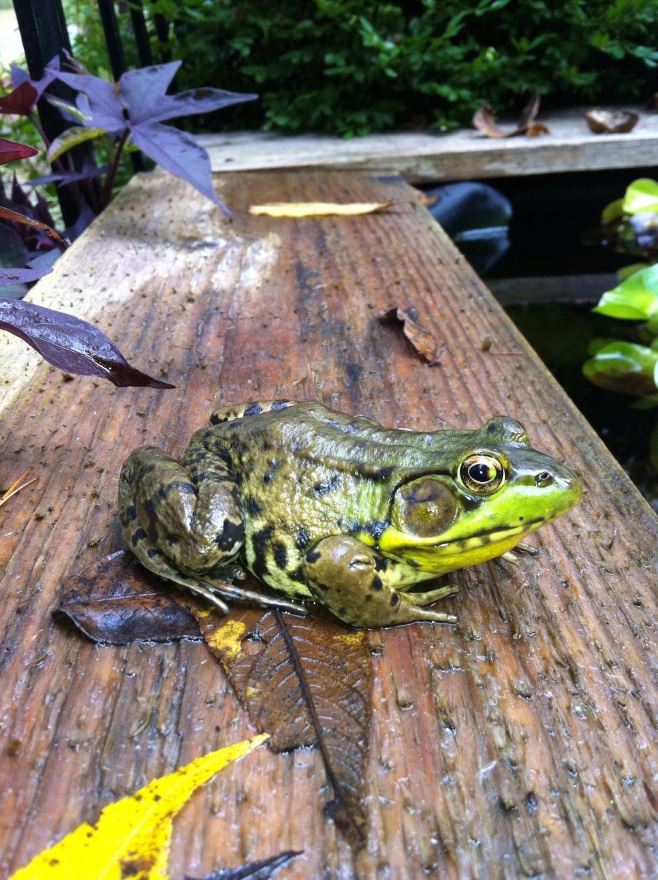 The Bullfrog not so much ridge, you can see her’s starts at her eye and goes around her ear (tympanum). 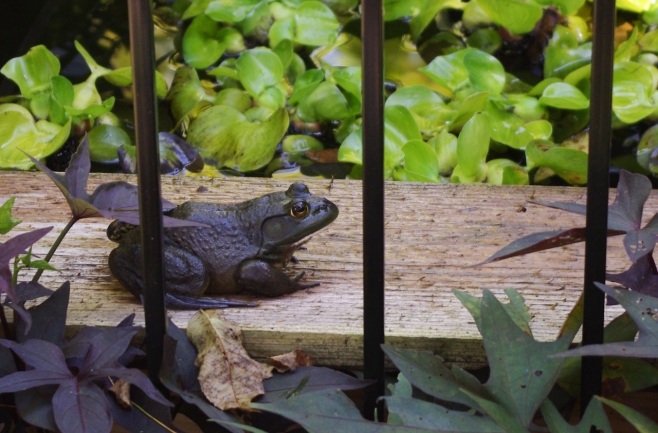 I refer to the Bullfrog as female because the male of both species has a yellow throat and the one above has a whitish one. The photo below shows the color difference in Green frogs. 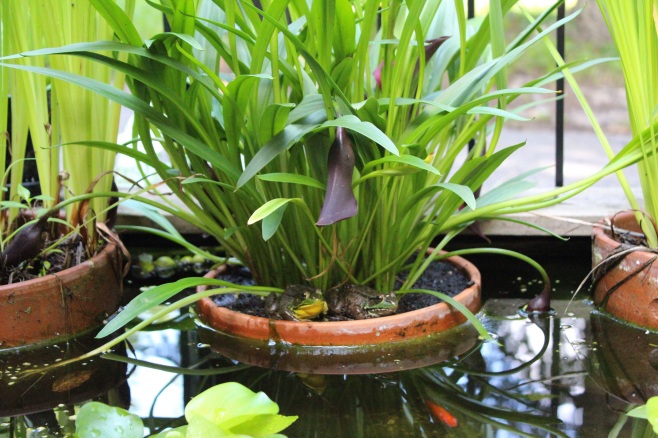 Male Green frogs reach sexual maturity at one year of age and females at two or three, seems a bit unfair to me. Bullfrogs don’t reach sexual maturity until four or five and take two to three years to develop from egg to frog – that’s a long time as a tadpole.
Here are some photos that clarify the size difference. 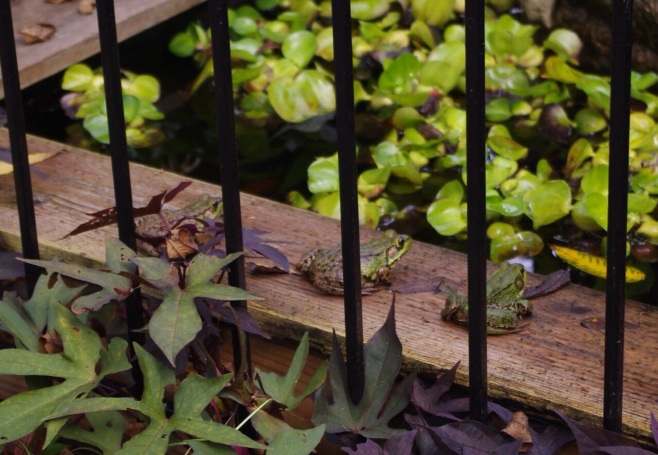 The bars are 3.5 inches apart and the cedar plank is 6 inches wide, essentially Green frogs are as long as Bullfrogs are wide. Well, at least are/were. 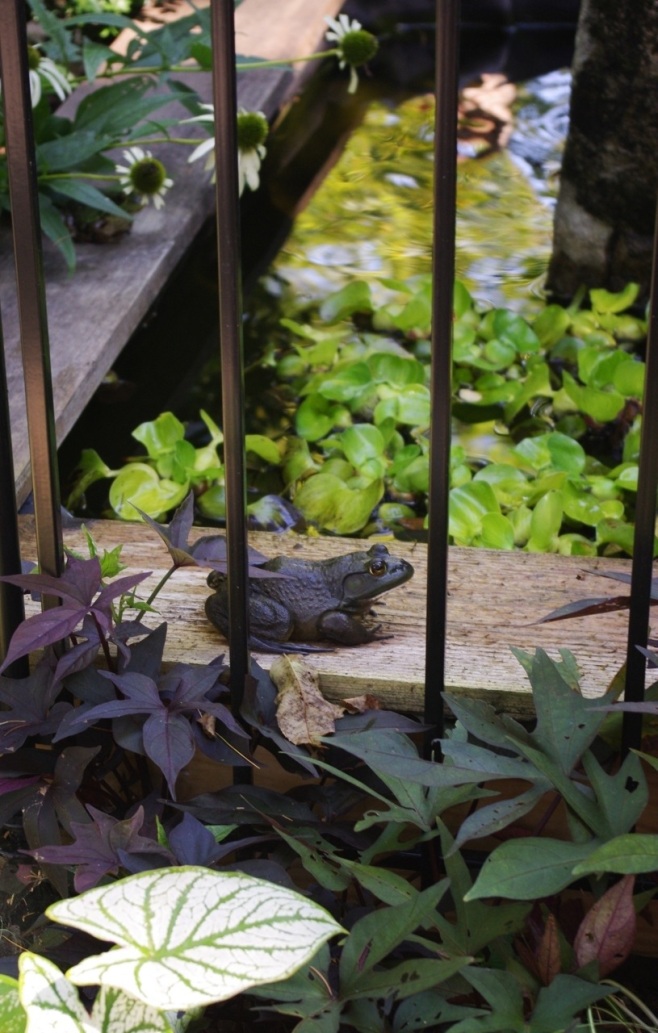 More fun facts can be found at Rhode Island Vernal Pools. All the information in this post should be credited to them, any mistakes to me. It’s a very neat site, lots of cool ecology info.

I garden in a somewhat haphazard manner, mostly in pots on my porch/deck and three beds near the house. The pots I can manage on my own, but anything in the ground I have to coerce others into maintaining (it’s a good thing I have fabulous friends). Things grew at unexpected rates this year, some thrived with the additional rain and some sulked from diminished sunlight, but I had relatively few fatalities.
This was my most successful color combination this year, mostly because everyone was a little horrified at the colors initially and they almost died in a late frost in the spring – they looked skanky for ages. 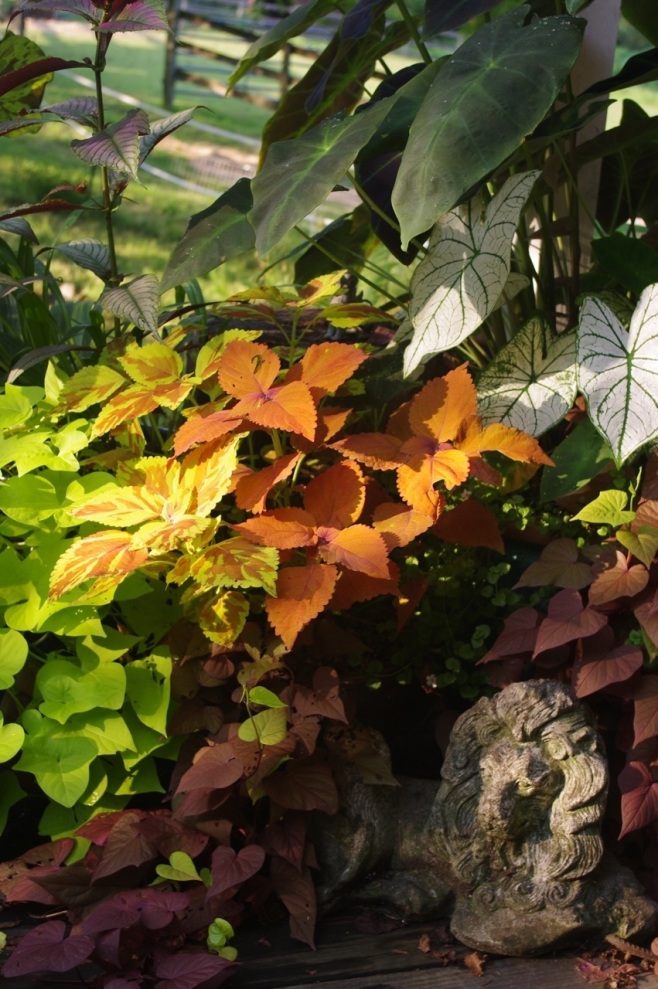 I find my water feature, sometimes referred to as the puddle absurdly hard to photograph. Late day looking toward the paddock and the perennial bed. 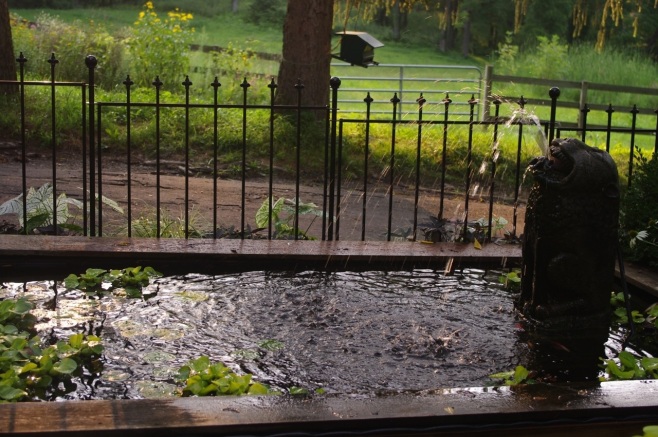 The fountain at the raised end. 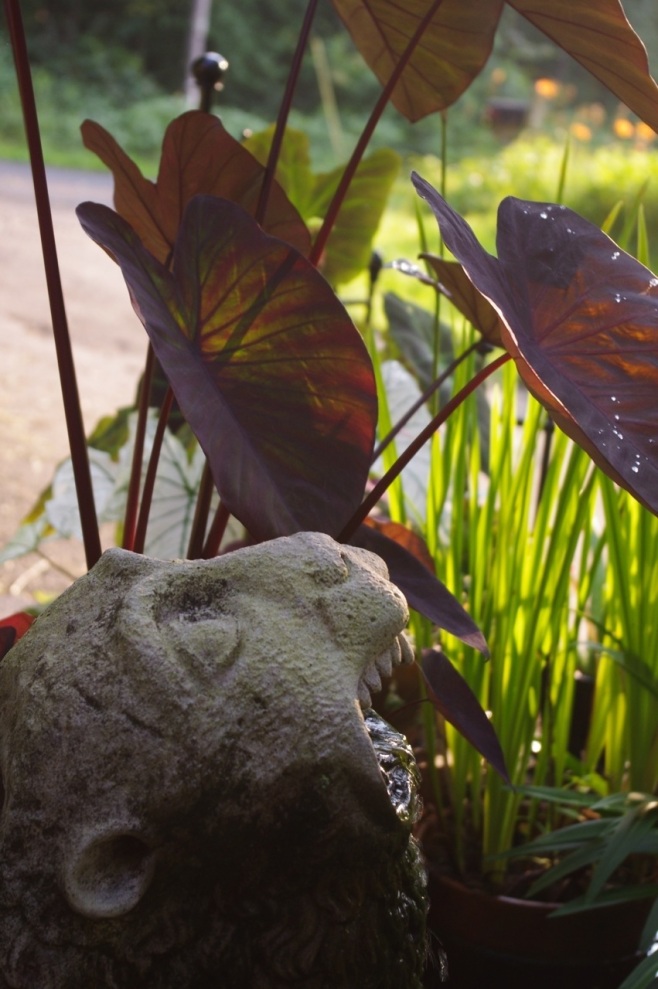 The best thing about the puddle is the critters – frogs, fish, dragonflies, butterflies and in dry weather the birds. 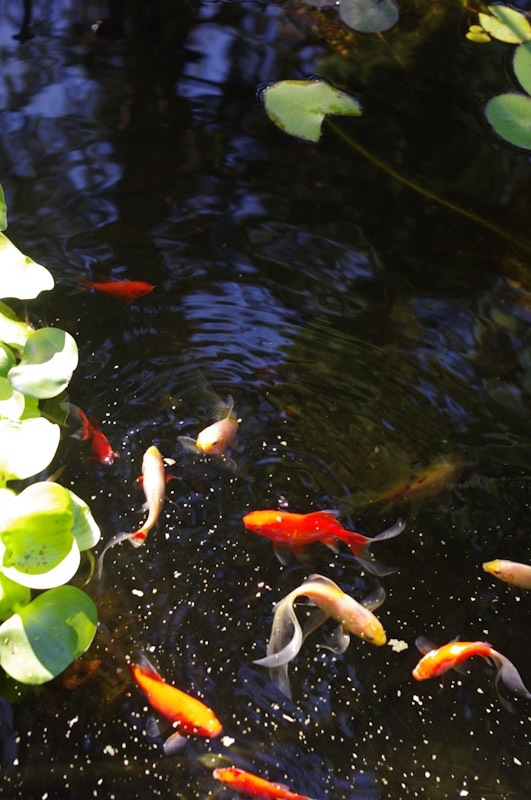 They are green frogs (Rana clamitans) which is right up there with blue birds for a name, so simple you’re sure you’re wrong. I often see four at the same time and I’ve grown ridiculously fond of them.
Fish are very frustrating to photograph, it’s all luck….you just keep shooting and hope they arrange themselves in a pleasing fashion at some point…..argh. The frogs are easier to capture, but hard to make interesting. 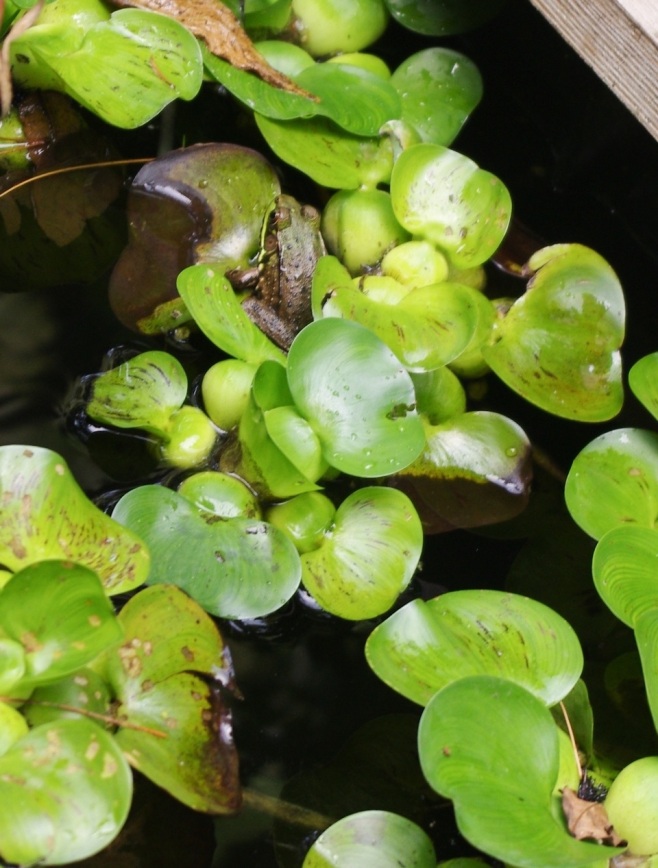 I regularly see four of them sunning themselves. They are Green frogs (Rana clamitans) a name that’s right up there with Blue birds for simplicity and making you feel like an idiot when people ask “What is it?” “It’s a green frog.” “I can see that, what kind of frog is it?” “A Green frog” “If you don’t know….” You get the idea, happened to me with Blue birds, the woman was convinced I was making fun of her. A bit not good.